The year I was to turn 50, the triathlon came to town.

The sleepy little city where I lived in Eastern Utah had decided to host an ambitious national event: the “DinoTri.” Flyers were everywhere, and organizers were out marketing to try to raise visibility. As the local high school swim coach, I encouraged many of my students to register for the race. Then I was challenged—“Coach Bruno, I’ll do it if you’ll do it!”

I’d never swum in open water before, so the first part of my training was to go down and check out the canyon where we would be swimming. A friend of mine accompanied me. It was early April in the mountains. She wore a full-body wetsuit, and I wore a borrowed sleeveless one. We started out into the water, shivering and shaking as we went. It was so cold that, halfway across, my lungs constricted and I couldn’t breathe. “We have to go back,” I notified my friend. Imagine the headlines: “Swim coach drowns in Red Fleet Reservoir!”

As the season progressed, I was able to spend more and more time in the water. I had to change my swimming style somewhat. I noticed that when I swam in a pool, I would open my eyes while under the water, to look at the lane lines. I’d close my eyes when I turned my head for a breath. In the open water, I had to do the opposite in order to get my bearings. Soon I was feeling pretty confident about the swimming portion of the race.

I knew that the run would be the most difficult part of the course for me. I had never been a runner. I started my training slowly, running around the block in my neighborhood. I became a familiar sight, puffing along in the high altitude. Neighbors would wave from their porches and encourage me on. The first time I ran a complete 5K in under 45 minutes, I called my mom (aged 73) in excitement. My mom has been running races for decades. She still competes in the Senior Olympics. “Oh, well,” she said. “You’ll get better.” She told me her time for the 5K, it was 29.24. With that I thought I would go take a shower and lie down. And, maybe not get back up.

The evening before race day we all went down to the canyon to register and leave our bikes. As I locked mine up, I noticed that it looked a bit different than the rest. My bike was not light and aerodynamic and had a large padded seat. I noticed that I looked a bit different than the rest of the competition as well. The women had tight, muscled bodies. They had calves. They had expensive running shoes. As I stood in line, I kept being passed over. I finally spoke up. “I’d like to register for the race.”

“Oh, are you in the race? I’m sorry!” the attendant said. She looked at me in a strange way. I understood. I looked like the stay-at-home mother of 8 (which was true). I looked like my favorite food was ice cream (again, true).

I nearly chickened out right then. I don’t know what possessed me to get up early the next morning and line up at the start. But I did it. I got in the cold water with my borrowed wetsuit. I swam the distance and hopped out ahead of half the pack. I got on my Wal-Mart bike and chugged up the first 2-mile hill. I listened to “on your left” so many times I couldn’t count them. I learned that perhaps I should have trained more on the bike portion. I learned about what happens to your legs when you get off your bicycle in a triathlon and try to run.

I finished the race. 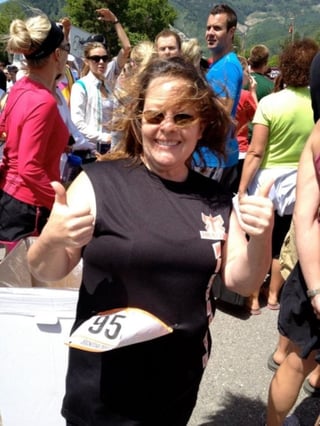 Since then, I’ve run a “Warrior Dash” mud run, and several Ragnars. I have accomplished physical feats I didn’t realize I could do. I’ve been so impressed by adults who come to me, wanting to learn to swim. They are brave. Some of them have never submerged their heads in water before. Some have a great fear of water. Some don’t think they can learn to float.

But, they all find success in the water. Little by little, they learn and they improve. They overcome challenges and they provide a great example to their children. Swimming is indeed a life-long skill. It’s never too late to experience new challenges. I learned that the year the triathlon came to town.

Are you ready for a new challenge? We offer additional programs from Adult lessons to Masters and Triathlete classes. Check out all of our programs by clicking the button below.