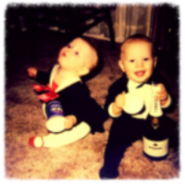 Two of a Kind, Growing up a Twin

It is true what they say about twins holding a special bond, or connection one could say. However, there are a lot of things they don’t tell you. Being a twin is more common now then it was when I was growing up. My brother and I were considered a special rarity, two for the price of one. Being a mom brings its own challenges as it is, and there is a reason moms are called superwoman. Being the mom of multiples should have its own kind of name. Something more along the lines of a cartoon that was around when I was younger called “Go Go Gadget,” that was my mom. I don’t know how she did it, but her and my dad did a great job!