Being a Mom Comes with Both Highs and Lows

What do you love Most about Being a Mom? Asking a mom this question will give an infinite amount of answers. There are so many things to choose from when it comes to loving your life as a mom.

I can’t say there haven't been moments and challenges in my continuing life as a mother that I don’t question and wonder if what I’ve done to raise them from babies, to little ones, to now adults was right. And, still continuing to support and be there for them, I wonder, did I do an OK job? And, am I still doing an OK job?  Despite my own fears and doubts.

I was fairly young when I became a mother at 20 years old. I would have had three children, three beautiful daughters, but it was not to be so…

My oldest daughter now is titled as my oldest by default.

My first child, my first daughter which I carried to full term passed away. It was sudden, quite unexpected, and heartbreaking.

My world collapsed with the passing of my daughter.  I was racked with guilt that I must have done something wrong, or didn’t do something right. I should have not missed that doctor appointment because I was tired and wanted to be selfish and get more sleep.

It’s not natural they say, that a parent should survive their child, their children…

After that event and just a few months later with still a broken heart, I conceived again.

My first pregnancy was rough, I remember being constantly ill with symptoms of morning sickness and the symptoms didn’t abate throughout the full term of my pregnancy.

My second pregnancy was also rough but not with symptoms of morning sickness; I experienced a short bout which seemed to have only lasted in my first trimester. I was thankful for that.

I was in pain, the pains were coming from the vertical caesarean cut I received with my first pregnancy birth, the scar was not even healed more than three months when I conceived again with my second child.

Sharp pains radiating up and down my back and legs, debilitating me, causing me to minimize movements at all times. It forced me to take my maternity leave when I was just five months pregnant. During my bed ridden months, I thought a lot about the what if's, so many what if's…

Fears and doubts swirling about in your mind. Waking nightmares of losing another child…

The few days and the last evening before my scheduled caesarean, I didn’t sleep; as I’m sure you all have guessed by now... because I was afraid of what was to come.

Then the morning came to go to Labor & Delivery. As I laid there on the operating table, feeling nothing below my neck like a quadriplegic, my daughter took her first breath outside of my body, and my child was born. I heard her cry so loudly, like a Banshee, that I was relieved, ecstatic, crying so happily to meet this most beautiful, most important being which God gave me as my most precious gift.

As she was placed beside me by my doctor, she stopped crying as if she knew who I was and hearing my voice carried her to comfort and safety.

It was so amazing that God thought to gift me another beautiful baby girl and some time later of course, for a third time.

My daughters, Mioshi and Akemi as said before in the beginning are no longer little but adults. Twenty and 19 years of age to be exact. 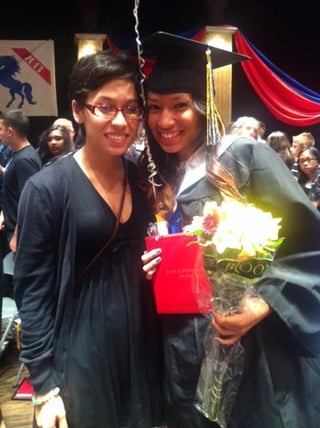 So, to choose from so many things, so many experiences that are still continuing, so as long as my body holds breath… what do I love most about being a mom?

I have the perfect love which I believe wholeheartedly that was meant for me alone.

And, to be gifted those perfect gifts, makes me humble and in awe that I, Maria Thelma Wallen, another human being in this very large world, is worthy enough to be loved by the most beautiful beings in my world, in my life.

P.S. The story of life continues… As in six months’ time I will be a Lola (AKA: Grandma).

Participating in Sports With A Disability