They may break your bones, but that’s not really the point. 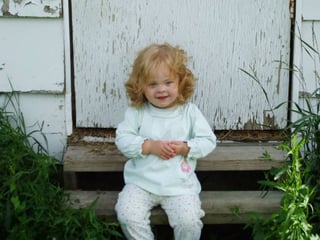 My child plays outside. She falls over, gets knocked over by the dogs and other kids at daycare, not to mention her own lack of coordination at 16 months old. But she loves it – would rather be out than in no matter what the weather. Just two days ago we got home from work/daycare, and I opened the door to let the dogs out. She was out before they were, and no sooner had I turned and walked toward the sink (about 10 steps away) I heard a smack, followed by a cry. One of the dogs probably knocked her over, and from where she was sitting I can imagine it was just as she was going down the small step (which she had mastered weeks ago) onto the patio. I didn’t see a single mark on her, and she wasn’t holding her face or anything, so I assumed she had just had a shock and held her until she stopped crying.

When I put her down – you guessed it – right back out the door! I went straight out with her this time.

We walked around the patio, on the rocks, on the grass and over to the budding trees we planted last year. She was fascinated by the tiny white and pink flowers blooming on the Newport Plums. She picked a few and then wanted to get down. She’s pretty good at navigating the stones and getting where she wants to be. Soon she sat down and started sorting through the smallest stones. This is one of her pastimes. (Is she old enough for me to call it a pastime?) She reached up and grabbed my hand and started placing in it tiny stones until full. Then she would take my thumb and turn my hand over to dump the stones out.

After about three or four rounds of this game and I could feel the shadows of the setting sun looming closer. As we all know in Colorado, it gets much cooler in the shade. We can go from 30 to 70 degrees in one day and back again. So I stood up, reached down with my arms as she reached up with hers, picked her up, and we followed the dogs back into the house.

Little girl is never happier than when she is covered in dirt and grass and playing with whatever she finds. (I see a lot of yard work in future.) My little explorer has been going on walks with me in the winter since she was just weeks old. We’ve been to the zoo several times in all seasons. (She loves animals, obviously.) We’ve even gone sledding in our own back yard. Her favorite is going down the hill on her own. You couldn’t get that smile off her face if you wanted to!

Relaxed by our short walk and fresh air, we went upstairs to commence our nightly routine. When she was ready to receive her sweet dreams, she pulled her blanket to the floor, crawled on top of it and we just lay there, pointing to each other’s noses and giggling.