"In 2014, a survey completed by the American Red Cross found that more than half of all Americans (54 percent) either can't swim or don't have all of the basic swimming skills." - The World's Largest Swimming Lesson

SafeSplash Austin participated in the annual "World's Largest Swimming Lesson" this week. The event, originally created by the World Waterpark Association in 2010, aims to highlight the importance of swimming lessons as a "life-saving skill for children and a vital tool to prevent drowning, the second leading cause of unintended, injury-related death for U.S. children ages 1-14" explains the organization.

About the world's largest swimming lesson

Celebrating its eighth year, the World's Largest Swimming Lesson (WLSL) event happens over a 24 hour period across the entire world! Organizations around the globe sign up to participate each year highlighting the importance of swimming lessons and water safety skills at their individual facilities. Team WLSL hopes to reach 1 billion people this year with the message "Swimming Lessons Save Lives". 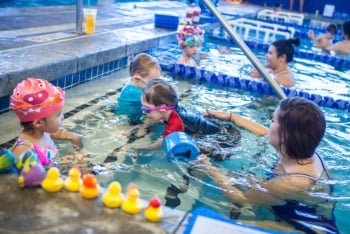 This year local Austin news stations were on hand while SafeSplash Austin swimmers and instructors participated in the worldwide event. "Most likely, if kids are taught in an organized setting, children who take swim lessons are much more likely to avoid any sort of swim-related accidents. Swimming is healthy. It's a life skill and something that they can do now and forever to keep them healthy." said SafeSplash Austin owner, Betsy Zielinski, about the event.

See the news report below!

Register today if you are interested in learning more about SafeSplash and available swim lessons!

We have programs available for Toddlers all the way up to Adult Swim Lessons!

Splash-N-Tell: Shayan, Student of the Month

“Don’t Be…That Dad”: A Dad’s Survival Guide to Taking Their Child to a Swim Lesson